The end of this Community site

This last week I received a message form the organisation who provides this site. They wrote me that the site will be closed by tomorrow, October 1st, if not a fair amount of money was paid. The terms are changed, the free site is no longer available. One has to pay.

I wrote Marianne Schubert, section leader of our visual art section in Dornach, to hear if she was willing to continue this community site and pay for it, but she responded…

The end of this community site

Dear Members of this Community site of the International Art Section.

It has been a while since I wrote you, and that is mainly because, for a one year now, I have passed on my work as Section Coordinator of the Visual Art Section of the Anthroposophical Society in Dornach to Marianne Schubert. Since May 2015 she is in charge of leading the Visual Art Section at the Goetheanum.
My latest action was organizing the Ascension Conference 2014, and trying to pass over the work…

There was a lady who let me know that she had two crosses for me. When I went to visit her she turned out to be a creative person herself living in an old house in the country. At the same moment her son, a musician, was paying her a visit with his family, Such friendly and quiet people. They gave me two crosses made by her late husband.

Home again I was interested to know what kind of music her son is into. He indicated that I might not like it. Here is the link to his band:…

A big second handbookshop was taken over by another bookshop here in the city and all the second hand books were sold for €1 a piece. I bought The Studio from 1901 "Modern British Domestic Architecture and Decoration". There is a supplement with advertisments: wallpapers, lead lights, stained glass, designers and manufacturers of fittings for electric light, art-metal-work. Beautiful drawings, very eleborate, totally different from today.

Currently I am reading the latest Flensburger Heft about Gefühle. I've read a lot of the talks with spirits of all kind through Verena Staël von Holstein. People can think what they want about it but to me it's a serious opportunity to develop my own awareness that everything and really everything is connected to spirits, everything can speak and many spirits can be heared by us. We need to practise.

In the meantime I keep painting, so I want to show you my newest work, because this is what a blog is for, isn't it? I try to make images in which you can stare and start to find a world you haven't …

In the meantime I keep painting, so I want to show you my newest work, because this is what a blog is for, isn't it? I try to make images in which you can stare and start to find a world you haven't seen like that in "reality" before. But you do recognize things. The longer you look at it the more you see (I hope). I see a pont and all kind of figures. They just…

There was an article on me in the paper half a year ago: in an interview I asked readers to let me know if they had a crucifix they didn't want to have anymore and also maybe didn't want to throw awa…

There was an article on me in the paper half a year ago: in an interview I asked readers to let me know if they had a crucifix they didn't want to have anymore and also maybe didn't want to throw away either. So, I got many responses, so many that now I have boxes full of them in my tiny workspace. Most of them are pre World War II and these objects have gone through very rough times, I think.

Hi, this is not something I am good at, but I am going to try again. I saw someone leaving this group because she finds it too difficult to write in English. Hmm, I feel quite the same. But I will try anyway.

I started a new project half a year ago: Still Life with Passion. I will share my most recent photo with you:… 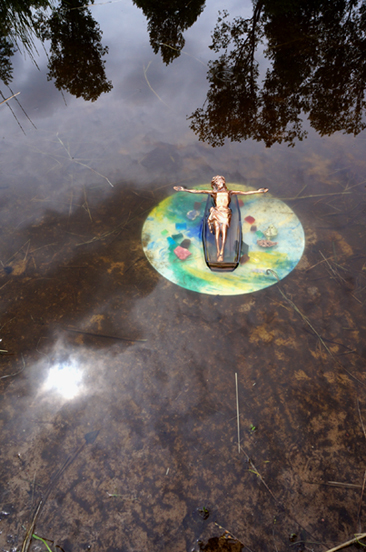 Some thoughts on the practice of beholding art

I've added a new post to my art gallery blog, about taking a contemplative approach to experiencing art, with a focus on light and darkness in painting. Vernissage 2 May at 6 pm - At the Venice Biennale you can see 54 of Rudolf Steiner's "Blackboard Drawings" till 24 Novembre 2013. Info: www.labiennale.org

The Role of Art in Education